Rich and smoky with seaside minerals with a hint of ash and bitter chocolate drops. Vanilla follows with oily unroasted chestnuts and a hint of fudge with a malty sweetness. A drop of water adds a creamy clotted cream note with fruit appearing in the form of unripe citrus in a flan glaze.

Since 1815, each Laphroaig Distillery Manager has been the custodian of the craft to make the richest single malt in the world. Over the years, each has passed on their skills and traditions to the next generation to continue this legacy. To honour this passing of knowledge, our Distillery Manager John Campbell has created Laphroaig Lore, the richest ever Laphroaig. Lore, meaning the passing of a skill or tradition through word of mouth, is the story of how we make Laphroaig, encapsulating the craft passed down from generation to generation over two centuries.

‘Lore’ is a complex marriage of both classical Laphroaig styles and many ages of Laphroaig. The marriage draws from the peaty power of Laphroaig in the same vein as Quarter Cask but with the smoothness of double matured stock finished in European oak hogsheads. To add even further depth and complexity we used our most heavily peated whisky matured in ex-Laphroaig barrels along with some fully sherry matured casks. To ensure none of this amazing flavour was lost we bottled Lore at a full 48% ABV and simply barrier filled before bottling. The result is stunningly complex.

Tasted at:
06/12/2018
Nose:
Smoky and minerally (limestone), fresh, slightly creamy, green apple, vanilla, maritime notes, a touch of honey. A drop of water opens up grassy and intensifies honey notes
Palate:
Oily, smoky, a bit sweet and peppery, salty notes, some oak, apple-vanilla pie, lemon zest, cold ashes
Finish:
Long, smoky, slightly malty and oaky, getting dry fast
Conclusion:
Interesting whisky, quite pleasant and well-balanced. Not very complex but I cannot say it’s flat. I’m quite skeptical about awards Lore boasts as for me this expression has nothing extraordinary. At the beginning it was quite overpriced but now the price dropped to acceptable level.
Rating:
8.4 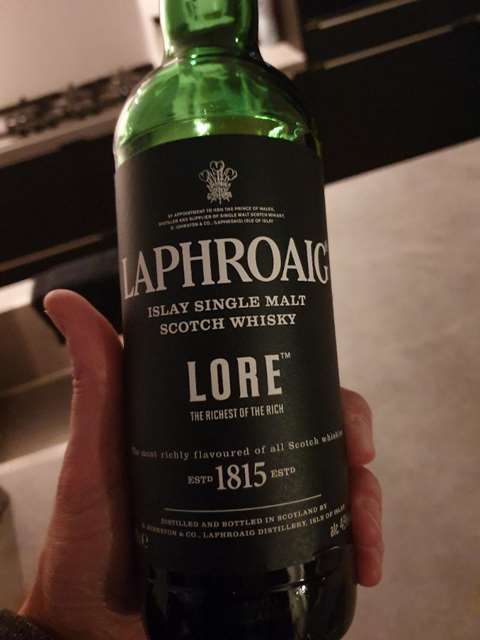 Tasting note:
One of my first whisky tasting experiences was Laphroaig 10 and I loved it. The complexity hooked me on Islay whisky. The Lore is a full-bodied expression of Laphroaig. There’s so much to enjoy beyond just peat, smoke, and brine. The mix of old and new along with the hint of sherry make this a marvelous dram.
Rating:
9.4 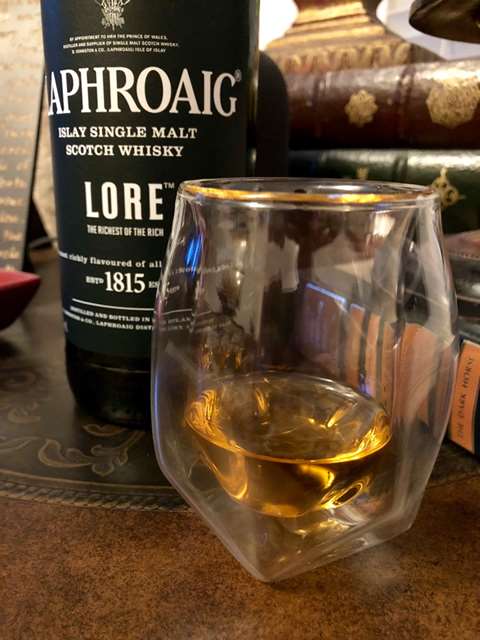 Tasted at:
17/12/2016
Tasting note:
Smell: Peaty, Salty, Seaweed and something that reminds me of beers like Paulaner, sort of citrusy but bready too. Taste: Sweet, smokey
Rating:
9.0

The price section has moved to a dedicated website: WhiskyPrices.co.uk.

Click here to compare 4 up to date prices of Laphroaig Lore.